A whopping 70% of mainland Australia is classified as arid or semi-arid. 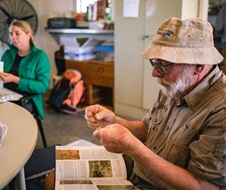 A far cry from the dense rainforests or colourful coral reefs that spring to mind when considering natural wonders, our arid ecosystems can look barren and desolate to the untrained eye.

This couldn't be further from the truth. Australia's arid ecosystems are home to some of the continent's most amazing plants and animals. There are few better examples of these species than those found at Nanya Research Station and Tarawi Nature Reserve, located within the Scotia mallee region of far western NSW.

Professor Martin Westbrooke is the person largely responsible for Nanya as it exists today. He started bringing students to Nanya way back in the late 80s, as a researcher and lecturer at Federation University in Victoria. Located within the Scotia Mallee of Barkindji country in southwest NSW, Martin quickly realised that he had found not only an excellent place to teach students, but one of the most intact patches of mallee habitat in New South Wales.

"We found a lot of rare species in those early studies, and some that hadn't been recorded in New South Wales previously," Recollects Martin.

Back then, Nanya was private property, and Martin had an agreement with the owner to use some old buildings as a base for research and to bring students. After many years of this agreement, a change of owner was looming, and it looked like the potential buyer was going to be a goat farmer. This would possibly have meant the end of the research and degradation of the delicate mallee ecosystem, which supported many threatened species.

The Australian Government's National Heritage Trust provided the money to purchase the property, and in 2003 Nanya was officially owned by Federation University. Martin kicked into gear immediately, taking additional conservation measures like closing all the watering stations to reduce grazing pressure to natural levels.

Adjacent to Nanya is Tarawi Nature Reserve. This beautiful 33,500-hectare reserve was created in 1996 by the NSW National Parks and Wildlife Service and boasts similar mallee habitat to Nanya, supporting threatened species rarely found anywhere else in the state.

The short grazing history of the Scotia mallee region contrasts with much of what has happened to other mallee habitat since European settlement. Low stocking rates due to unsuitable feed and limited water supplies have left native vegetation relatively untouched, and the deep sand of the mallee makes it largely unsuitable for rabbits.

The unique fire history of this region adds to its ecological value. The matrix of mallee patches has arisen through a diversity of fire regimes, including large areas that have not burnt for over 100 years. To top it all off, the area is home to over 30 threatened species. All of this means Nanya and Tarawi are not only valuable from a conservation perspective, but also from a research perspective. This area is an ecologists' playground - something that Federation University and the Saving our Species program have partnered up to explore.

The meeting place of science and management

With the assistance of the NSW Environmental Trust, Federation University, Saving our Species and National Parks and Wildlife Service are collaborating to research the conservation of several threatened species and ecological communities found in the Scotia mallee. According to Martin, these partnerships are vital thanks to the information sharing and management expertise of all parties involved.

"We're researching methodology and how we can better look after endangered species, and we're currently engaged in 5 different threatened species conservation programs in collaboration with the NSW Government," Says Martin.

The research includes pitfall trapping to monitor key threatened species, such as southern ningaui, vegetation surveys, exclosure sites and much more. Not only do we learn about these threatened species and their conservation needs, but partnerships like this also extend that information to local landowners, interested individuals and volunteer groups. Most importantly, this information is available to the next generation of ecologists; the undergraduate students who getting on-ground experience working with conservation programs such as Saving our Species.

What lives in the Scotia mallee?

One species that's of particular interest is the notoriously ferocious but adorably tiny southern ningaui (Ningaui yvonneae), a little marsupial related to quolls and tassie devils. Don't let their small size fool you – these little balls of terror are powered by an insatiable appetite and will take on spiders, centipedes, small lizards and other small mammals.

A big contributor to the natural diversity in this region is a complex of salt lake systems and gypseous soil. Few plants can cope with the soil's high salinity and sulfur content. An extremely rare plant community dominated by the wiry glasswort (Tecticornia lylei) is only found on Nanya and a few adjacent areas. Exclosures have been built to manage herbivore access and determine the impact of grazing on this threatened ecological community.

"The findings will determine how much grazing this endangered community can cope with and will inform management practices when it comes to grazing on nearby properties."

Arid NSW represents an enormous area of Australia that needs careful management, but most people in Australia are unaware of these habitats and their inhabitants. Luckily, thanks to partnerships like these and all the individuals involved, we are learning more about how to protect these delicate arid ecosystems.