Actions are under way in the Snowy Mountains to save the southern corroboree frog from extinction. 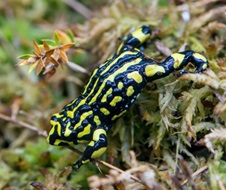 To help save the southern corroboree frog (Pseudophryne corroboree) from extinction, quarantined breeding enclosures have been established in Kosciuszko National Park under Saving our Species.

The southern corroboree frog is one of Australia’s most endangered species, and is found only in the high altitude wetlands and bogs of Kosciuszko National Park. Surveys and monitoring suggest that fewer than 20 adults remain in the wild, compared with hundreds of thousands in the 1980s.

Numbers have declined as a result of a pathogen known as the Amphibian Chytrid Fungus. This lethal disease, which cannot be cured, has led to the decline and extinction of many frog species worldwide.

OEH staff designed and constructed the enclosures to:

In April last year, some captively-bred southern corroboree frogs and their eggs were released into the first quarantined enclosure. One year on, the adult frogs have bred and remain in good condition. More captive-bred eggs have been released recently into a second field enclosure.

The project is a collaboration between OEH, Taronga Zoo, the Amphibian Research Centre, Melbourne Zoo and Healesville Sanctuary and is being keenly watched by those involved in frog conservation worldwide.

To learn more about the Saving our Species program or to get involved, visit our website.

Malabar Headland returned to the people of New South Wales