Conservation efforts to save the Tumut grevillea have resulted in a population increase from just 620 individuals to over 1700. 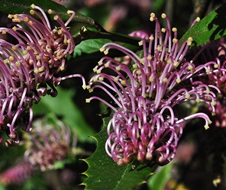 The critically endangered Tumut grevillea has a highly restricted distribution and is only known from 2 small populations. Its main occurrence is along a 6 kilometres stretch of the Goobarragandra River approximately 20 kilometres east of Tumut. There is a very small population that straddles the boundary of 2 private properties at Gundagai.

It's thought that the biggest threat to the species was grazing by stock.

An intervention to help save the Tumut grevillea has seen the population increase from 680 individuals in 1993 when it was discovered, to around 1700 plants in 2020.

Conservation efforts have involved protecting known populations, seed collection, propagation and a translocation program, as well as other measures including targeted weed control.

The Tumut grevillea recovery program is a Saving our Species partnership funded by the NSW Environmental Trust and involves partners from the Central Tablelands and Riverina Local Land Services, Tumut Landcare, the Goobarragandra Reserves Trust as well as local landholders around Tumut and Gundagai, who have played a vital role in its recovery.

To get involved in Saving our Species or to find out more about ways to support the Tumut grevillea recovery program, please email savingourspecies@environment.nsw.gov.au.