The population of a critically endangered plant species only found on the NSW north coast has leapt from 10 to more than 1500 trees in just a decade. 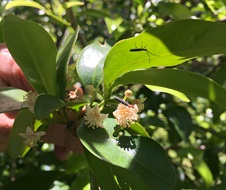 “In 2010 we had just 10 adult trees left – only one of which was female – and genetic testing on the seedlings showed inbreeding. Safeguarding Coastal Fontainea’s future was critical,” she said.

The NSW Government’s Saving our Species (SoS) program sought scientific advice from the Royal Botanic Garden Sydney on establishing viable populations – as a result, cuttings were taken from the 10 remaining trees and planted in small clumps across private and public land.

“Today, we have 1,564 Coastal Fontainea plants, some of which have grown to 5m tall. Many are now flowering, fruiting and producing seedlings with a broader genetic pool. We are thrilled with the results,” Ms Brown said.

“It’s an exciting outcome as we’ve taken a threatened species with a decreasing gene pool, and used simple genetic information to effectively turn the situation around and secure this species’ future,” Dr Rossetto said.

Coastal Fontainea is a small evergreen tree which grows to around 8-10m in height and is only found on volcanic soils in the littoral rainforest near Lennox Head. It has shiny dark-green leaves and small white flowers.

Find out more about threatened species in our SoS program.