An extensive research program into fluctuating water levels at Thirlmere Lakes has confirmed that climate variations were largely responsible for the ancient lake system's decline in water levels over the last decade. 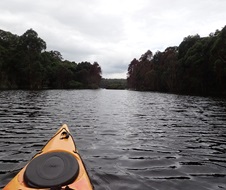 The 4-year study found no direct links between the drying of Thirlmere Lakes and the nearby coal mine but could not rule out a smaller (relative to climate) impact on water levels from mining.

The mystery of the drying of the lakes, which are thought to be 15 million years old, has been investigated for nearly a decade.

Dr Peter Scanes, Acting Director of Water, Wetlands and Coasts at the Department of Planning and Environment (DPE), said the research confirmed factors like rainfall and evaporation were responsible for most of the recent drying and water loss at the freshwater lakes.

'The drying has been increased by the recent droughts but our investigations of sediment cores taken from the lakes also found that the lakes have dried before,' Dr Scanes said.

'In fact, there was a major drying period around 12,000-21,000 years ago. The last 120 years of historical records also indicate that the Lakes have dried intermittently.

'Our scientists also looked at the underlying geology of the 5 lakes. Those studies found the lakes are like leaky bathtubs. They fill with water after rain and dry out on the surface from the sun but they can also leak into the groundwater.

'Understanding the dynamics of how the lakes work is important for both scientists and the local community, who have been very interested in what is behind the recent drop in water levels.'

The $1.9 million research program was funded by the NSW Government and included scientists from the department, the University of NSW, the University of Wollongong and the Australian Nuclear Science and Technology Organisation (ANTSO) with support from the NSW National Parks and Wildlife Service.

The researchers looked at the lake system's sensitivity to external influences, the interaction between surface water and ground water, how water flows into and out of the lakes as well as its sediments and underlying geology.

Dr Scanes said researchers found no direct connection between Thirlmere Lakes and a nearby coal mine.

'Relative to climate, the impact of mining and groundwater extraction would be smaller, given climate factors are responsible for between 83 to 98% of water level fluctuations in recent times,' Dr Scanes explained.

'However mining impacts could not be ruled out as there was not enough data collected prior to mining occurring nearby. We therefore have no yardstick for comparison to conditions before mining took place.'

A 2012 Thirlmere Lakes Inquiry report by an Independent Committee speculated that the most recent changes in the water levels were due to climatic variations such as droughts and floods. However these earlier studies did not have access to the detailed data on surface water, groundwater, sediments and geology collected in the current program.

A review of those findings by the NSW Chief Scientist and Engineer in 2013 agreed more research was needed into how the lake system works. This resulted in the $1.9 million Thirlmere Lakes Research Program launching in 2017.

The findings of the Thirlmere Lakes Research Program can be found online.

Following significant rainfall events in June 2016, February 2020, March 2021 and more recently, Thirlmere Lakes are potentially at their highest levels for the last decade.

Gardens of Stone State Conservation Area closed due to weath...