Three commemorative bronze sculptures designed by Aboriginal artists have been chosen to mark the 250th anniversary of the first contact between the crew of HMB Endeavour and the Gweagal people on the shores of Botany Bay. 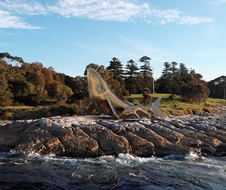 The installations will be erected at what is now Kamay Botany Bay National Park, Kurnell ahead of 29 April anniversary this year.

Minister for the Environment, Sussan Ley today announced that artists Julie Squires and Theresa Ardler’s works ‘Wi-Yanga and Gurung The Whales’ and the ‘Nuwi/Canoes’ have been chosen along with Alison Page with Nik Lachacjzak’s ‘Eyes of the Land and Water’.

“We want all Australians to visit this culturally significant site, to help to interpret the many stories of this historic place and, more importantly, to understand its part in our shared story,” Ms Ley said.

“The Kamay 2020 Project aims to present differing perspectives of the site, and to encourage respect as they visit the national park, which will receive a $50 million upgrade funded by the Commonwealth and State Governments.”

“Upgrades to the visitor centre and park infrastructure will ensure visitors to this important site can get a better appreciation of its significance as part of our shared history.”

Minister for Communications, Cyber Safety and the Arts, Paul Fletcher, said the Kamay 2020 Project Board has selected works which include story-telling of both Aboriginal and European viewpoints of the arrival of the Endeavour.

“Art is a powerful tool for telling people’s stories and interpreting historical events, and we want these sculptures to promote understanding and reflection as people look back on the landing in 1770,” Minister Fletcher said.

“Aboriginal and Torres Strait Islanders had already been here for more than 60,000 years when the HMB Endeavour arrived. Marking the meeting place of the Gweagal people and the crew through this installation gives us an opportunity to come together as a nation to reflect on both sides of our shared history – from the ship and from the shore.”

The commemorative installations are based on concepts placed on public exhibition for community feedback in 2019. ThinkOTS will assist in installing 'Wi-Yanga and Gurung The Whales’ and ‘Nuwi/Canoes’ and UAP Australia the ‘Eyes of the Land and Water’.

The installations are just one aspect of the larger Kamay 2020 Project which will support community education and interpretation programs, provide new ways to learn about and enjoy this historically important place, and deliver on the vision to make Kamay a place of significance to all Australians that contributes to the national identity.

“On 28 April 2018 it was announced that the Commonwealth and NSW governments would jointly fund the implementation of Stage 1 of the master plan works,” Minister Ley said.

“Stage 1 will include a new visitor centre, cafe and exhibition space, ferry wharves to re-establish the physical, social and cultural link between La Perouse and Kurnell, enhanced access around the site, restoration and repair of the historic Alpha House and conservation works to the 19th century Cook and other monuments.”

Chaired by the Hon. Bruce Baird AM the Project Board was selected by the Commonwealth and NSW Governments to represent stakeholder interest in the project.

Hazard reduction burn at Blackheath Catchment East in the Bl...

Hazard reduction burn at Linden Creek in the Blue Mountains

Hazard reduction burn at Nepean Narrows in the Blue Mountain...