The current search by the NSW National Parks and Wildlife Service (NPWS) for a Humpback whale entangled in rope has been suspended due to deteriorating weather. 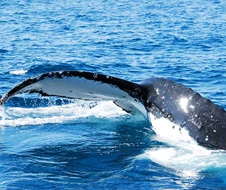 The NPWS search resumed early this morning after it was first spotted off Bondi yesterday.

The NPWS search involved extensive helicopter surveillance as far north as the Central Coast. An NPWS vessel was also sent to join the search while staff, supported by volunteers from ORRCA (Organisation for the Rescue and Research of Cetaceans in Australia), were stationed at a number of headlands along the coast between Sydney and Norah head.

NPWS Greater Sydney Branch Director, Deon van Rensburg said this afternoon, "despite the support of large numbers of volunteers from ORRCA, Marine Rescue NSW, commercial shipping, the boating community including whale watching vessels and the media, sadly we have not been able to find this whale."

"We have conducted a very extensive search but even though this is a very large animal it is still a little like trying to find a needle in a haystack," Mr van Rensburg said.

"Conditions at sea have deteriorated considerably this afternoon. The Bureau of Meteorology has issued gale warnings for Sydney and Hunter waters which makes observations from the air, land and sea virtually impossible because of the white caps.

"The Bureau predicts conditions will get worse overnight. We have been forced to suspend the search until conditions improve.

"There are a lot of whales heading north at the moment. Our crews saw plenty but none that were entangled" he said.

Mr Rensburg said NPWS disentanglement crews have been stood down but will be mobilised quickly should the animal be sighted and crews up the coast have been put on standby if the whale is spotted.

"We are very grateful for the support we have received so far from all those involved," Mr Van Rensburg said.

The annual migration of Humpback whales will see around 30,000 whales head north along the east coast to breed making it one of the largest wildlife migrations on the planet.