Wanted! Seeds to save critically endangered plants from fungal disease

Land holders and property owners across the state are being asked to keep their eyes peeled for scrub turpentine and native guava on their properties as the NSW Government Saving our Species program establishes an emergency seedbank for these critically endangered native shrubs. 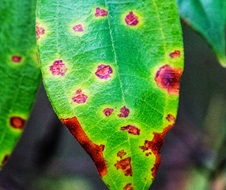 "Myrtle rust is most easily identified by the bright yellow spores which develop on new growth," said Mr Stehn.

"The fungus usually attacks young leaves and new shoots. With post-fire re-sprouting and germination events starting to occur, understanding the impact and spread of myrtle rust is more important than ever.

"Scrub turpentine and native guava are two critically endangered species from the Myrtaceae family that are extremely susceptible to Myrtle rust, with both of these species experiencing severe population decline over the past decade as a result of the disease.

"To save them, we're working with the Royal Botanic Gardens Sydney and their Australian PlantBank facility to establish an emergency collection of seeds and plant material, which will be used for important research into disease resistance and breeding, as well as a source for potential future translocation projects.

"While we've collected cuttings from approximately 300 plants at more than 40 locations between Sydney and the Queensland border so far, collecting more seeds is our priority and we need the community's help.

"With the scrub turpentine and native guava across the state currently flowering and fruiting, now is the perfect time for land holders with these plants on their properties to get in touch with us and help to conserve these critically endangered native plants," said Mr Stehn.

Land holders with flowering or fruiting scrub turpentine or native guava on their properties are encouraged to contact Craig Stehn on sosmyrtlerust@rbgsyd.nsw.gov.au