Remote cameras have spotted two elusive spotted-tailed quolls stalking the shadows of the Green Cape Light Station and the shores of Disaster Bay south of Eden. 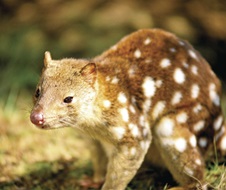 Senior Research Scientist Dr Andrew Claridge said these curious creatures are two of only four quolls ever spotted on camera in Ben Boyd National Park in the past 10 years.

“Both quolls are male, appear to be around 2-3 years old and look very healthy,” said Dr Claridge.

“The first was captured lurking in the shadows of the light station around 2am and the second was caught on camera further up the road at Disaster Bay,” Dr Claridge said.

“The really big surprise is that this is our first ever record of the endangered Spotted-tailed Quoll in coastal heath in the region.

“The new images and the handful of other records over the past decade supports the notion that there could be a resident population of quolls right on the coast.

“Each Spotted-tailed quoll has a unique spot pattern or markings so it is relatively easy to distinguish individuals and in this case, we could be looking at close relatives.

“The quolls photographed were probably out hunting for mammals like ringtail possums, bandicoots, native mice and rats.

“During Winter female quolls are busy giving birth and raising pups, so males return to their bachelor ways and go back to roaming across the landscape,” Dr Claridge said.

The remote cameras that took these snaps form part of a long-term monitoring program by the National Parks and Wildlife Service to measure the response of native fauna to fox control in Ben Boyd National Park and Nadgee Nature Reserve.

“Seeing these two quolls literally pop their heads up when we were focussed on bandicoots and potoroos was a very unexpected but delightful surprise,” Dr Claridge said.

“It also reinforces that the local reserves are in great shape, affording habitat for an endangered marsupial carnivore.

“So far the cameras have only snapped male quolls which begs the question - where are all the females?

“We have found quoll tracks on nearby beaches that show prints from smaller quolls and juveniles which indicate that the females are around but remain camera-shy.