Four spiritual sites that make up a creation story on the far south coast will soon be dual named, respecting ongoing Aboriginal connection to Country. 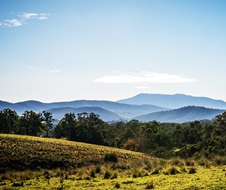 Kane Weeks from the NSW National Parks and Wildlife Service (NPWS) said the dual names will sit alongside the existing names and were put forward by the Gulaga and Biamanga Joint Management Boards.

Following a public consultation and consideration of all submissions received, the Geographical Names Board has officially assigned the dual names of Gulaga for Mount Dromedary, Biamanga for Mumbulla Mountain, Barunguba for Montague Island and Najanuka for Little Dromedary Mountain.

'Dual naming these places not only helps to preserve Aboriginal language but also acknowledges continuous connection to these cultural sites,' said Mr Weeks.

'Names convey the significance, sense of history and identity of a place and NPWS will continue to look for opportunities to restore Aboriginal place names.'

Bunja Smith, Chair of the Biamanga National Park Board of Management, said dual naming is one way to share culture with the broader community.

'We’re trying to elevate the status of these places by naming them with their first name, not their last name,' Mr Smith said.

Roslyn Field, Chair of the Gulaga National Park Board of Management, said that these spiritual places should be known by their Yuin name.

'Najanuka known as Little Dromedary is her second son, but he wasn’t allowed to leave far from home like his older brother.

'Gulaga from way up the top can always see her sons in the distance, and now the whole community will know them and call them by their real names,' Ms Field said.

Both names have equal status and are considered official names. Signs, maps and directories will feature both names and NPWS will update signage on park..

Ms Field said that the changed signage will reflect the continued importance of the Dhurga language, history and traditions to First Nations custodians.

Gazettal of these dual names is separate to the process to rename Ben Boyd National Park.

NPWS has begun contacting stakeholders to seek their input on the best way to choose a new name for Ben Boyd National Park. This process will take time and will not be rushed.

Visit the NSW website for more information on Biamanga and Gulaga national parks and Barunguba/Montague Island.