In a little over a month, the young fur seal released into Sydney Harbour in December is likely on his way to New Zealand after spending the Christmas break in Tasmania. 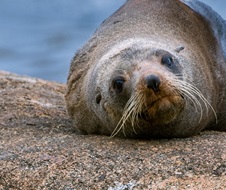 Minister for Environment James Griffin said Skip the fur seal was released as part of the $9.1 million Seabirds to Seascapes project, helping restore marine biodiversity and better understand how species use the waters around New South Wales and beyond.

"It's incredible to see how far 19-month-old Skip has travelled in such a short period," Mr Griffin said.

"Skip has now travelled more than 2,500 kilometres south, where he's currently having a feed on the East Tasman Plateau, after spending Christmas week on secluded Craggy Island, north of Flinders Island, where he spent a few days hauled out and making short fishing trips.

"Amazingly, within the first 2 weeks after his release in Sydney Harbour, Skip had travelled more than 800 kilometres south, on the ocean current 'superhighway' made famous in Finding Nemo, the East Australian Current.

"The successful tracking of Skip's remarkable journey is a huge milestone for the Seabirds to Seascapes project and paves the way for other seals to build a more complete picture of seal movements."

Skip was rescued in Queensland suffering from a shark bite on his flipper and weighing about 10 kilograms, which is 30-40% underweight.

After 3 months of rehabilitation at Sea World, Skip was brought to the Taronga Wildlife Hospital in Sydney where he was fitted with a specialist tracker before being released in December 2022.

Fur seals are listed as a vulnerable species in New South Wales, and the satellite data Skip the seal is collecting through the NSW Government's Seabirds to Seascapes project will help identify the preferred habitat, breeding grounds and diets of seals to ultimately protect them better in the future.

"Skip is now foraging around the East Tasman Plateau, which is a submerged microcontinent," Dr Pitcher said.

"It's an area where the sea floor is about 600 metres in depth, surrounded by sea floor depths of more than 2,500 metres, so it's a comparatively shallow area that attracts a lot of marine life and provides good fishing opportunities.

"It will be fascinating to see where he decides to go next. From the East Tasman Plateau, he could continue east towards New Zealand, west towards South Australia or back north towards New South Wales."

Australian and New Zealand fur seals are protected species, after they were almost hunted to extinction in Australia in the 1800s, with an estimated 250,000 killed for the fur trade.

The $9.1 million Seabirds to Seascapes project is supported by a NSW Environmental Trust grant of $6.6 million, and $2.5 million in kind from program partners.