Snails and slugs sliding back after fires

One of NSW’s most range-restricted groups of land snail and slug, impacted by severe bushfire during 2019, has been found to be recovering. 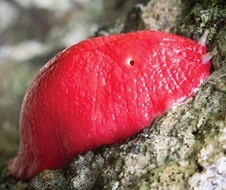 Fearing the worst and hoping for the best

Project Officers with the Saving our Species program feared the worst when the 2019 Nandewar Ranges bushfire burnt more than 17,000 hectares of bush and tore through most of the habitat of the Mount Kaputar land snail and slug Threatened Ecological Community (TEC).

However, during recent spring surveys, Project Officers located a large number of snail species that make up the TEC, including many juveniles.

Adam Fawcett, a Senior Project Officer for the National Parks and Wildlife Service, manages threatened species conservation projects in north inland NSW. One of these projects sees him coordinate surveys and monitoring of the Mount Kaputar land snail and slug TEC.

’We really don’t know how these snails survived the bushfires, but it’s likely they were located deep in rock crevices, under large logs or deep in the leaf litter, which provided enough protection during the fires. The results from the spring survey indicate that the population of the majority of the species in the TEC are recovering well’.

A gathering of local species

The TEC includes some species endemic (local) to the region and found nowhere else on earth, as well as others occurring as isolated populations.

‘The charismatic giant pink slug is the most well-known member of the TEC and is most commonly seen on tree trunks around the summit of Mount Kaputar on foggy mornings or after rain’, says Adam.

‘The TEC includes some fascinating species including two carnivorous snail species, a hairy snail, a keeled snail and a large number of micro-snails’.

Adam says that he has hope that the continued implementation of these management activities informed by research and monitoring will improve the long-term prospects of these species.

‘Members of the public can get involved, by reporting sightings of the giant pink slug using the Slug Sleuth app to help with ongoing work to manage this TEC’, says Adam.

Slug Sleuth is a free app that is now live in both iOS and Android app stores and ready for use.

For more information about the Mount Kaputar land snail and slug Threatened Ecological Community (TEC), visit its profile page on the Environment, Energy and Science website.