One of Sydney's most historic and spectacular places has been recognised by the NSW Government, with South Head added to the State Heritage Register. 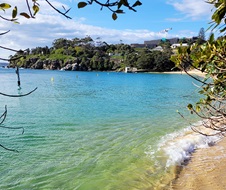 "With its soaring sandstone cliffs, much loved beaches and green open spaces, South Head is one of the most outstandingly beautiful parts of Sydney," Mr Griffin said.

"Listing the South Head Cultural Landscape on the State Heritage Register acknowledges the diverse and important stories of this place, which deserve recognition because they helped shape New South Wales as we know it today.

"South Head has strong historical and archaeological links to the Birrabirragal people, with evidence of Aboriginal occupation into the middle of the 19th century, including at Camp Cove, which is known to have been the home to Cora Gooseberry, a significant Aboriginal leader.

"The site tells us stories of thousands of years of continuous Aboriginal occupation, first contact encounters between British and Aboriginal people, Sydney's history as a working harbour, and South Head's role in its defence during periods of war."

Much of South Head has been a national park since 1977, and the site is a popular recreational area for locals and visitors to Sydney.

Member for Vaucluse Gabrielle Upton said after years of working with the community towards this historic outcome, South Head is now protected forever.

"This has been a long journey and worth every bit of effort together with my community. South Head is a place of unique and international cultural, environmental and historical significance. It holds a special place in our hearts for its exceptional natural beauty with deep ties to our local and indigenous history," Ms Upton said.

"As the heritage gateway to Sydney Harbour, South Head marked the entrance to Port Jackson for ships and served as a landmark for early European settlers' arrival into the Harbour. Prior to that, it was an important place for Aboriginal people, including for fishing, art and other rituals.

"The exceptionally high number of public submissions received in support of the heritage listing shows the importance of South Head and its value to the people of New South Wales.

"I am so proud we will soon be finalising the National Parks and Wildlife Service South Head Masterplan. The Masterplan will give more opportunities to enhance cultural and natural attributes and improve accessibility and amenity for locals and visitors alike."

South Head is home to historically and technically significant buildings and ruins that illustrate the themes of maritime safety, defence and water policing.

These include Hornby Lighthouse, the extensive network of fortifications and defence structures at Inner South Head and Lady Bay, and the archaeological remains of important water policing structures.

Listing on the State Heritage Register provides legal recognition that an item or place is of State heritage significance and that the community wants to keep it for future generations.