A rare southern right whale has been spotted 500 metres off shore of Sydney’s Northern Beaches this afternoon prompting authorities to remind the public to stay well clear when on or in the water. 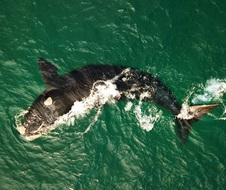 National Parks and Wildlife Service (NPWS) Greater Sydney Area Manager Chad Weston said this was the third sighting of a southern right whale on the Northern Beaches this season.

“There are less than 270 southern right whales in the south eastern Australian population and only a few calves born in NSW waters each year.

“After the species was nearly pushed into extinction by whaling operations in the 1830s and 40s, it’s wonderful to see a small part of the south east Australian population returning year after year to our NSW coastline.

“These incredible creatures visit New South Wales each year during the winter months seeking out shallow, protected bays and estuaries along the coast to breed and birth their young.

“They are known to remain in these shallow waters after giving birth, often for many weeks, which makes them particularly vulnerable to any disturbance during this fragile time with a newborn.

“While we are nearing the end of the calving season, which means they’ll soon be returning to their summer feeding grounds in Antarctica, it’s never too late to remind people to give these whales space and share the water.

“The incident at Shelly Beach earlier this month involving the mother and her calf was extremely concerning. It is lucky that no one was injured.

"For the safety of the whales and the boating community, vessels, including surfboards, must stay at least 100 metres from a whale. This extends to 300 metres when a calf is present, or the vessel is a jet ski.

"If you're swimming, diving or just enjoying the water on your own or with friends and you spot a whale, then you must stay at least 30 metres from the whale in any direction.

“If you are identified approaching a whale in contravention of these regulations, you can be fined up to $3,300,” said Mr Weston.

Unlike the humpback whale population, which has recovered strongly over the past 5 decades, monitoring of the south east Australian southern right whale population has shown little change in mother-calf pair numbers during that time.

The NSW Government is committed to reducing impacts to threatened and protected marine species through the Marine Estate Management Strategy (PDF 12.3MB).