The NSW Government is asking people to help spot Illawarra's spotted-tailed quoll among a line-up of thousands of animals as part of a citizen science project, Environment Minister Gabrielle Upton said on Monday 24 July. 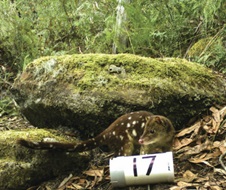 More than 100,000 images from 29 remote cameras are online for the public to help sort through as part of the NSW Government Saving our Species quoll project in the Illawarra.

"We need help sorting through thousands of animal selfies to help narrow down the number of spotted-tailed quolls in the region," Ms Upton said.

"This is an important conservation project because the spotted-tailed quoll is the only remaining quoll species in the state."

Quolls are the project's target animal but the cameras have also captured other species such as a wedge-tailed eagle eating a ringtail possum, long-nosed potoroos and even a powerful owl.

"All this information will go towards improving the monitoring of quolls and other threatened species across the region," Ms Upton said.

It will help the NSW Government increase the resilience and size of the local quoll population.

The project, undertaken at the Barren Grounds Nature Reserve and Budderro National Park, is funded under the NSW Government's $100 million Saving our Species project.

The photos are available to view on DigiVol, which is a crowdsourcing platform developed by the Australian Museum in collaboration with the Atlas of Living Australia.