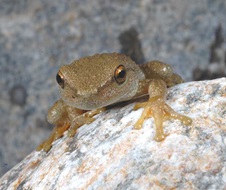 Four hundred of the elusive grey-green coloured amphibians were released into the park three years ago and this month monitoring shows that more than 50 percent of the frogs have survived and are breeding.

David Hunter, Office of Environment and Heritage (OEH) Senior Threatened Species Officer, is thrilled by the latest survey results as previous attempts to reintroduce this species into the park have failed.

"We took a calculated risk when we reintroduced the frogs - bred in captivity at the Amphibian Research Centre in Melbourne - by placing them at a site that is outside their known range," Dr Hunter said.

"But this experiment is paying off and the survival rate for the frogs at this new site is extremely encouraging not only for these individuals but the entire species.

"The frogs introduced at other sites in Kosciuszko National Park in the past have been heavily impacted by Amphibian Chytrid Fungus a fatal pathogen that is the kryptonite of frogs," Dr Hunter said.

The endangered frog, also known as Litoria spenceri, was extinct in the wild in 2001 in NSW, a result of the Amphibian Chytrid Fungus wiping out the last known wild population.

For now, this introduced population has managed to avoid this disease - a major breakthrough for frog conservation here and around the world.

"We think the recent success is largely due to the fact that the new re-introduction site was selected to be much warmer than the frogs' previous known location," Dr Hunter added.

"The disease flourishes in cooler, moist environments so in this case it seems we have found the right conditions for the frogs to not only fight off the disease, but also to breed - this may be the only hope for maintaining the species in NSW, and helping them fight back from extinction.

"We are quietly confident our approach will prove successful in the long term and that this research will provide management options for other frog species also threatened with extinction by this killer pathogen," Dr Hunter said.

This NSW Government Saving Our Species and Environmental Trust Project aims to secure critical populations of this species in NSW in the long-term through reintroducing captive bred animals.

For more information on the Spotted Tree Frog and its conservation, visit the OEH website.