Studying threatened wildlife and their response to fire in the landscape

On the North Coast of New South Wales, including in World Heritage listed Gondwana Rainforests, scientists are studying the effects of fire on threatened mammals to help save them. 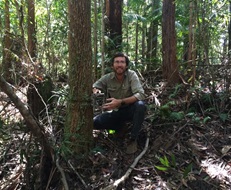 The research found that the activity of long-nosed potoroos and red-legged pademelons in the national parks did not change following small-scale ecological burns.

During the 2019–2020 wildfires, 4 of the 9 national parks that were monitored in the study were fire affected, these being Whian State Conservation Area and Nightcap, Tooloom and Koreelah national parks. The wildfires provided a unique and unexpected opportunity to conduct a before and after control impact experiment. Experiments with wildfires are uncommon as they can’t be planned.

Following the wildfires, the data suggest that the red-legged pademelon is highly abundant, with numbers greater than in 2016 and 2017. However, the long-nosed potoroo has not been detected in either burnt or unburnt forest in Toolom National Park, although it was detected in burned and unburned sites within Gibraltar Range National Park and Nightcap National Park. Given only 15% of Tooloom National Park was impacted by the fire, the scientists are undertaking further research to determine the cause of the absence of long-nosed potoroos in the park. A second study commenced in 2020 and is looking more closely at the long-nosed potoroo to find out more about its population demographics, the influence of dingo predation and whether artificial refuge structures can be used to restore and improve habitat suitability.

The findings from both of the research projects are contributing to a greater understanding of how fire affects population dynamics, habitat use, survivorship, movement patterns and predation for these threatened mammals. The findings are helping NSW National Parks and Wildlife Service identify the best management options across these 9 national parks, that will help lead to better conservation outcomes for these threatened species.

Both of these research projects are being led by Southern Cross University through a partnership with the NSW Environmental Trust's Saving our Species Burning Hotspots – Gondwana Threatened Species and Fire project, which aims to secure threatened populations of 8 species included threatened mammals in and around World Heritage listed Gondwana Rainforests of Northern NSW.

Read more about the findings from the first research project.