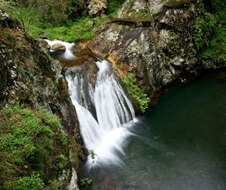 "Zhijindong Caves Global Geopark is an area of about 17,000 hectares and the caves are ranked as the most beautiful in China.

"The Zhijindong Caves boast the largest and most numerous caverns in the world with a grand array of very impressive stalagmites and stalactites including high columns, flowstone, helictites and fossils.

"The Guizhou province, where the Zhijindong Caves are located, is known for poverty and lack of infrastructure but this is changing very fast.

"Both the National and Provincial Governments of China strongly believe that encouraging nature tourism through improving infrastructure, upgrading visitor facilities and protecting nature, will subsequently lead to the alleviation of poverty and sustainable economic growth in this part of China.

"As a result, there has been a massive investment in new airports, major highways and bullet trains, which is starting to benefit regional economies and encouraging greater numbers of domestic and international tourists to this scenic part of regional China," said Mr Conroy.

The Jenolan Caves form a spectacular natural wonder on the western edge of the Greater Blue Mountains World Heritage Area and are one of the world's oldest and finest cave systems. Visitors can explore any of 11 huge show caves or take part in adventure caving, ghost tours, night tours, bushwalks and occasional underground performances. Facilities include hotel, motel, backpacker and cottage accommodation, a gift shop, restaurant and pop-up café. Bookings can made by phone or online: Official site of the Jenolan Caves, Blue Mountains, NSW, Australia.

You're invited to the South East environment webinar series