Surveying for the threatened plains-wanderer

In this short film, Matt Cameron, the Senior Team Leader, Ecosystems and Threatened Species, takes you out on the wide open plains of the Riverina during the plains-wanderer survey of May and June 2015. 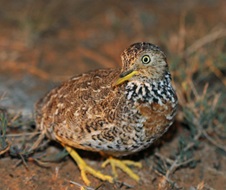 The vast majority (>99%) of records of plains-wanderers (Pedionomus torquatus) in NSW over the past 30 years come from an area of the western Riverina bounded by Hay and Narrandera on the Murrumbidgee River in the north, the Cobb Highway in the west, the Billabong Creek in the south, and Urana in the east. Even within its western Riverina stronghold, the plains-wanderer has a very patchy distribution.

The plains-wanderer is an endangered bird whose population has declined by more than 90 per cent over the past 15 years. Results of this survey will inform important recovery actions for the future management of the NSW population.