Know a business, group or person doing great things for the globe? With just two weeks remaining until nominations close on 8 June, sustainable businesses, community groups and individuals across New South Wales are encouraged to apply for the 19th annual Green Globe Awards. 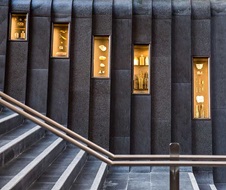 Office of Environment and Heritage executive director Kate Wilson said that past winners across all 10 categories of the awards have helped set the standard in NSW becoming a cleaner and greener State.

"Previous years' Green Globe Award winners from all corners of the state have demonstrated how to adapt, to thrive and to move toward a more sustainable future," Ms Wilson said.

Anna Jane Linke, CEO at Seaside Scavenge, said it was an exhilarating feeling to win the Young Sustainability Champion Green Globe Award in 2017.

"Being amongst so many people pushing the boundaries and doing things that they are really passionate about is really important," said Ms Linke.

"The environment is something we really need to care about as without the planet we wouldn't be here."

Tom Belsham, Manager Sustainability Programs at the City of Sydney was part of the team that won the Built Environment Award in 2017.

"The Built Environment award recognises the holistic approach of the City of Sydney to drive market transformation and accelerate environmental leadership in this sector," said Mr Belsham.

"Our program demonstrates the untapped sustainability potential of strata buildings and the importance of collaboration to deliver a low carbon economy."

The Stone & Wood Brewing Co in Byron Bay were awarded the Business Leadership and Premier's Award for Environmental Excellence in 2017.

"The Green Globe Awards were not only a great recognition for our team as we strive to act as a conscious business, but also provided a fantastic opportunity to network and meet like-minded organisations," said Stone & Wood Brewing Co Sustainability Manager, James Perrin.

"Hearing about the amazing work from other award nominees was inspiring, and we've since kicked off a collaborative project through discussions had with one of the other Finalists on the awards night."

The Awards will be judged by a panel of independent experts and presented at an event at The Art Gallery of New South Wales on 4 October 2018.

Nominations are now open until 5pm on 8 June 2018. To enter your project, organisation or nominate as an individual, go to Green Globe Awards