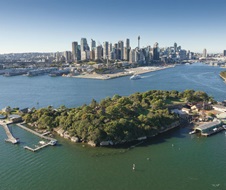 Coinciding with the 77th anniversary guided tours offer people the chance to discover the details surrounding this tragedy which left Sydney shaken and 21 people dead.

Run by the NSW National Parks and Wildlife Service (NPWS), the 3-hour tour takes place onboard a historic ferry which tracks the stages of the fateful night when the World War II conflict came right into Sydney Harbour.

"Until 1942, Australians lived with a comfortable certainty that wars took place in that mythic land called 'overseas'", Mr Thompson said.

"The tour reveals a lack of preparation, poor communication and a city in denial in the face of a carefully planned and orchestrated enemy attack – culminating in the sinking of the Kuttabul and the deaths of 21 allied Australian and British sailors, along with 6 Japanese submariners.

"It's a fascinating day out for any history buff or for those looking for an interesting insight into the history of our beautiful city.

Tour guests will retrace the path of the midget submarines as they entered Sydney Harbour, learn about the civilians and naval personnel involved, visit the Royal Australian Navy Heritage Centre at Garden Island to view the Conning Tower of one of the submarines, and learn about the fate of the 3 submarines and their crew," Mr Thompson said.

Tickets are now on sale for 2 Sydney Harbour tours.