The first 3 Blue Plaques for Sydney have been installed today, celebrating some of the Emerald City's most extraordinary historic figures. 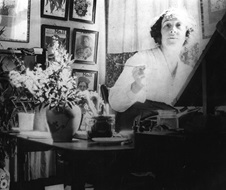 "The May Gibbs Blue Plaque, which has been installed at Nutcote in Neutral Bay, celebrates her grand legacy as Australia's first full-time, professionally trained children's book author and illustrator, whose work continues to delight readers to this day.

"The Sir Edward Hallstrom Blue Plaque, installed at the entrance of Taronga Zoo, recognises a self-made entrepreneur and philanthropist who cared deeply about conservation and remains one of the Zoo's most generous private benefactors.

"The NSW Government's $5 million Blue Plaques program is a fantastic way of getting communities excited about and involved in their local heritage around the State."

Member for North Shore Felicity Wilson said the Brett Whiteley Blue Plaque, now installed at his home in Lavender Bay, is a must-see for visitors to Wendy Whiteley's Secret Garden.

"Archibald-winning Brett Whiteley created some of his most famous works at his home and studio in Lavender Bay, inspired by views of Sydney Harbour," Ms Wilson said.

"These Blue Plaques celebrate and recognise the important contributions that Sir Edward Hallstrom, May Gibbs, and Brett Whiteley have made not only to our local community, but across NSW and Australia.

"We are incredibly fortunate to have such rich local heritage, and these Blue Plaques will ensure we are safeguarding our cultural heritage for future generations."

These are the third, fourth and fifth Blue Plaques ever to be installed in New South Wales. The first was the Caroline Chisholm Plaque in East Maitland. The second was the Nancy Bird Walton Plaque in Kew, Port Macquarie.

So far, 21 Blue Plaque recipients have been named, and the NSW public will be invited to nominate more noteworthy people, stories and events when a second round of nominations opens.

The remainder of the Blue Plaques will be installed in yet to be announced locations in the coming weeks. To learn more, visit Blue Plaques NSW