The NSW National Parks and Wildlife Service (NPWS) confirms the recent sighting of a blue whale off Sydney is extremely rare and possibly only the third to be seen off Sydney in nearly 100 years. 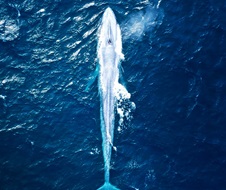 NPWS' Andrew Marshall said that this giant of the sea may have been over 25 metres in length and weighed over 100 tonnes.

"The blue whale is the largest animal on the plant yet despite its size it could have easily slipped by Sydney's coast unnoticed," said Mr Marshall.

"Blue whales are largely 'invisible' even to the most avid whale watchers and researchers as the creature is very rarely seen around the world.

"They are not often seen because they tend to live very far out to sea, their populations are widely dispersed and we have very limited data on its migration and critical habitat.

“We have reports of blue whales near Sydney from land-based observers at Cape Solander in 2002 and 2013. But this recent sighting is the first time we have aerial photos and vision of the whale confirming this species off our coast,” said Mr Marshall.

Unlike the humpback whale which is showing signs of an annual population recovery of around 10-11%, the blue whale population in NSW's waters remains elusive.

"That's why opportunistic sightings like this one are so incredibly valuable," said Mr Marshall.

"They improve our understanding of where these species live and suggest if there are measures we need to consider to try to protect them."

Sightings like this and of the rarely seen Blainville's beaked whale on the Central Coast in July are helping NPWS and other marine mammal experts continue to grow their understanding of whale species.

There are plenty of whale watching vantage points from our national parks in Sydney and right along the coast. Visitors are reminded to be COVID safe and always check the NPWS website for alerts before visiting a national park.

People can help whales by reporting sightings of injured or entangled animals, to NPWS on 13000 PARKS or the ORRCA (Organisation for the Rescue and Research of Cetaceans in Australia) hotline 02 9415 3333.

In a flap to put NSW birds on the map

Pelicans take flight from regional NSW in mega breeding even...