Areas of coastal national parks between Hat Head and Harrington on the NSW North Coast will be temporarily closed between Monday 20 May and Friday 31 May for aerial spraying of the noxious weed, Bitou Bush. 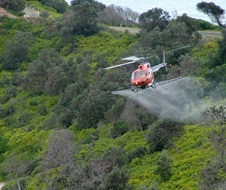 NSW National Parks and Wildlife Service (NPWS) Hastings-Macleay Area Manager Shane Robinson said: "Bitou Bush is recognised as the worst coastal weed in the state and one of 20 Weeds of National Significance.

"Controlling Bitou is a high priority on the North Coast and aerial spraying is an important part of our comprehensive weed strategy for these reserves," Mr Robinson said.

"For general community safety and as a precautionary measure, NPWS uses buffer zones to restrict access to certain areas on beaches and in the water during aerial spraying operations.

"Short-term closures will occur at sections of beaches, carparks, roads and walking tracks.

"Signs will be put in place before the closures identifying the affected areas and NPWS staff will be on site to assist during the closures.

"Spraying operations are weather dependent so there may be some delay in operations. NPWS apologises for any inconvenience", Mr Robinson said.

For more information please contact, NPWS Hastings-Macleay Area at the Verges Creek, Kempsey office on: 02 6561 6700 or the Port Macquarie office on 02 6588 5555 during business hours.

Sculptures to commemorate the meeting of two cultures at Kam...