The bag on our marine debris research

The most surprising thing that senior scientist Edwina Foulsham and her team have found on NSW’s beaches and estuaries since they began collecting marine debris in 2017 were 3 messages in bottles. 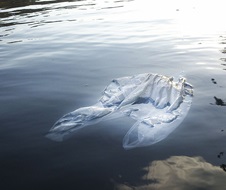 The first was written by a woman trying to teach her children about marine currents, the second was a letter from a German backpacker, and the third was a prank by a student claiming they were stranded on a deserted island.

Unfortunately, these fascinating finds are the exception. More often, they find objects that were never meant to end up in the water.

Citizens and scientists' partner on plastics

Foulsham is a marine scientist with the Department of Planning Industry and Environment and manages this program: the Key Littered Items Study. The research is part of the Marine Debris Monitoring Program funded by the NSW Environment Protection Authority (EPA), partnering with Southern Cross University, the Tangaroa Blue Foundation and Hunter Local Land Services. The study provides crucial insights into the waste items that most commonly end up in NSW's marine environments.

With the help of volunteers, the researchers sample the State's urban estuary sites 4 times a year. Remote beaches are sampled once a year.

The researchers collect every piece of litter along a transect at each of the nearly 20 sites up and down the NSW coast, collecting debris washed up between the low and high tide lines.

Wrapping up the data

In urban estuary sites, nearly half of all debris found in these locations are fragments of larger items that have been partially broken down, such as small pieces of plastic shopping bags and polystyrene packaging material.

Confectionary and snack wrappers are the most frequently found consumer item, accounting for about 20% of the litter collected.

"If you can take one plastic bag out of the system," says Foulsham, "that's 100s of fragments that won't end up in the ocean."

She says 5 of the most common whole items discovered in our urban estuary environments are: plastic bags, straws, cigarette butts, take away food and beverage containers, and plastic lids and bottle tops. During the pandemic, the researchers have also recorded more facemasks in waterways.

Surprisingly, most marine debris is not dumped directly into the ocean.

From turf to surf

"Around 80% of all marine debris comes from the land," Foulsham says. "Stormwater and floods take a lot of stuff out to sea."

Discussing the results from our remote beach, she says, "We tend to find more international plastic beverage bottles up north which may be from foreign shipping. The vast majority have no marine growth on them, so we can tell they haven't been in the water long enough to have travelled very far."

In the future, the researchers hope to identify not just what types of litter is the most common but what specific brands are making their way most often into marine environments.

"Marine debris and litter goes on a journey, from the shop to the house, to litter on the ground, to stormwater into estuaries, into the ocean and then onto a beach. The source of litter is usually a long way from where it ends up."

The types of marine litter that pose the greatest threat to our marine wildlife and the social and economic values that we all gain from the NSW marine estate is another key question Foulsham is investigating for the NSW Marine Estate Management Strategy. This information will assist the NSW Government to tackle the most important marine debris issues in New South Wales.

"Next time you see some litter near a waterway, pick it up and dispose of it properly. The sea life will thank you."

Find out about how the NSW Government is tackling litter thorough the NSW Litter Prevention Strategy.

Saving our Species: Working together for a greater impact

Saving our Species: Securing a future for NSW threatened pla...

Transform yourself into a threatened species with our social...

Threatened species experts to inspire you this National Scie...