The dirt on our soils archive

Kristen Clancy has one of the most unique job roles in the NSW Government - she is the Custodian of the State's dirt. 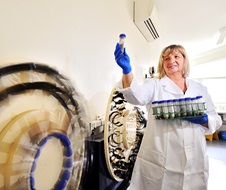 In an unlikely shed on the outskirts of Yanco in Western NSW is a precious collection of around 90,000 samples of soil, known formally as the NSW Soils Archive. Kristen Clancy, a senior team leader with the Department of Planning, Industry and Environment, manages this vast and hugely significant resource.

"Farm management practices such as fertiliser, pesticide, weedicide applications, bushfires, floods, droughts and climate change all have impacts on soils, and the fact we have such a large collection allows researchers to study changes over time," Clancy says.

"It's an absolute time capsule of what the soils across New South Wales were like the moment they were collected."

Samples for science and agriculture

The soils archive has specimens collected since 1994 and is the second largest collection of its type in Australia.

Samples for the NSW archive have been collected from around the State, following strict protocols to ensure consistency of sampling, location data and sample processing. These include sieving out organic materials and drying at 40 degrees Celsius before being stored in waterproof containers, ready for researchers to study. Each sample is preserved as a record of the soil at an exactly recorded spot for future generations of scientists and land managers to study and refer back to.

It is not only a priceless historical and scientific collection but also a massive financial asset as each sample costs approximately $500 to collect, process, analyse and archive.

Each sample in the archive is linked to GIS mapping and the department's eSpade website that allows researchers to match samples with locations at the click of a mouse.

The archive is a snapshot of the State's soils that preserves information from the day of collection.

Clancy says an example of the kind of research we can use the data from the soils archive to assist scientists in finding new locations with similar soils for translocating species of endangered plants.

Most importantly, having the archive means that research techniques that may not have yet been invented will be deployed on the samples one day. Having the soil archive has enabled our laboratory to develop a Mid infrared (MIR) calibration, which enables our laboratory to deliver rapid and cost effective carbon and carbon fractions (measures such as particulate, humus (organic matter in soil) and resistant organic carbon) analysis which are used in the carbon turnover and climate change prediction models.

A window back in time

"I love it from the fact that the archive is a moment in time, and it will mean that future researchers will be able to look at those changes over time."

And does she have any favourites in the archive?

"I love the rich red earth soils of western NSW," she says.

Find out more about our NSW Soils Archive and soil testing services.