'The Drip' incorporated into a national park

Environment Minister Mark Speakman today announced that the Baird Government had fulfilled its election promise to save a parcel of land known as The Drip, through its addition to the Goulburn River National Park. 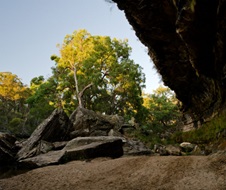 Mr Speakman said 23 hectares of land surrounding The Drip have been acquired by the Government and added to Goulburn River National Park. This fulfils a commitment made prior to the state election to protect in perpetuity this iconic feature.

Minister Speakman and Planning Minister Rob Stokes travelled to Mudgee last week to meet a representative of the Mudgee District Environment Group to discuss the commitment to protect The Drip.

“No mining activity will affect The Drip, and there will be no tunnels under this land which has been reserved today,” Mr Speakman said.

“We have undone Labor’s sale of The Drip. When Labor was last in power they disgracefully sold this natural wonder for $2000, in a 2010 lease conversion sale that cost the coal company less than $3 a hectare,” Mr Stokes said.

The Member for Upper Hunter Michael Johnsen said he was delighted the government had acted to save The Drip.

“This is great news for the local community and a great day for the environment with this spectacular piece of land saved for everyone to enjoy,” Mr Johnsen said.

Further work is ongoing in securing more nearby land for the national parks estate over the next two years. This is part of a binding agreement reached with Moolarben Coal which also ensures: no impact on water supply feeding The Drip feature and no subsidence impact from mining on The Drip and immediately adjacent lands.

“This is a Government that honours its commitments,” Mr Speakman said.

“We have returned The Drip to public hands after the former Labor Government converted the leasehold to freehold for mining interests for a paltry $2,000.”

“This is a win for the community. We are saving this spectacular feature for future generations to treasure and to enjoy.”

Songmeters and cameras record ducks of all descriptions at G...