'The End' Hill End's Festival of Arts, Culture and Heritage returns for fourth year in April

The iconic The End festival is set to grace Central West NSW from Friday 12 April to Sunday 14 April in the historic gold mining town of Hill End with an extravaganza of culture, heritage and arts. 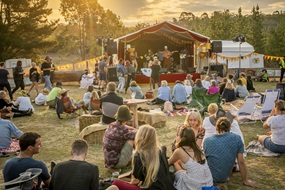 The iconic The End festival is set to grace Central West NSW from Friday 12 April to Sunday 14 April in the historic gold mining town of Hill End with an extravaganza of culture, heritage and arts. Presented by the NSW National Parks and Wildlife Service (NPWS) and major partner Bathurst Regional Council, the annual festival will offer a host of cultural displays, including live music and cabaret shows, art exhibits and installations, and the best of the region’s produce.

“The End is a high note on the Bathurst-Mudgee annual calendar with a huge program on offer which attracts visitors young and old to this unique festival weekend”, NPWS Team Leader Events and Park Programs Lauren Hiller said.

“It’s a perfect opportunity to learn about the rich history and artisan culture of Hill End, surrounded by beautiful heritage buildings and haunting colonial streetscapes harking back to the town’s gold mining heyday of the 1870s,” Ms Hiller said.

“The festival is also a rare chance to explore the picturesque Hill End Historic Site and experience an array of food offers, entertainment and local musical and artistic talent from the Central West.

“This year’s festival will feature more of the village’s heritage buildings open with artworks, exhibitions and performances. Visitors who book a ticket to the Cockle Shell for Ship roving theatre performance will also get a chance to see inside some fascinating sites which are rarely open to the public, such as the Presbyterian Church, Bryant’s Butchers Shop and the Great Western Store”, she said.

Festival-goers can book a ticketed show in the Royal Hall, or explore the village, sampling the best of Central West food and wine culture in the Golden Age Garden. The Garden is host to wine and craft beer producers from Mudgee, Bathurst and Orange, and features cheese from Exclusively Mudgee in Hosies’ pop-up Wine Bar.

Visitors can also revel in free live music running all day Saturday and Sunday on the Golden Age Stage featuring blues, country and folk acts; and free art installations and exhibitions staged in historic properties throughout the village, including ‘Portraits from ‘The End’ in the Sacred Heart Catholic Church presented by Bathurst Regional Art Gallery.

Festivities commence at 6:00pm on Friday evening in the Royal Hall with The Beginning of ‘The End’, an opening night gala featuring Mic Conway’s National Junk Band and ‘Settin’ the Woods on Fire: A Hank Williams tribute’, and a live band between shows.

Other program highlights include:

Camping is available in Hill End at the Village Campground and the Glendora Campground. The End Tent Village will also be available for visitors to book setup camp sites.

For more information about The End festival, including the program of events and accommodation, or to purchase tickets for the Royal Hall shows, visit: NPWS The End Festival 2019.

Hundreds expected to head back to Hartley

A golden opportunity: NPWS opens Expressions of Interest to ...