‘Convict Footprints on the Old Great North Road’ is a play that brings history to life in beautiful Dharug National Park, near Wisemans Ferry and is a great idea for Father’s Day this year. 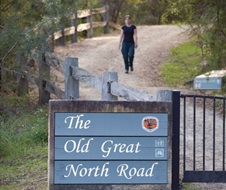 Step back in time with your dad and relive colonial history in this award-winning theatre-in-the-wild experience.

After receiving rave reviews, a highly commended in the Cultural Tourism section of the 2015 NSW Tourism Awards, multiple Regional Tourism Awards and Gold in 2013, the production is returning to the World Heritage site for its fourth season.

Convict Footprints Director, Mr Jerry Retford, said that the play was a true salute to the hardships faced by the convicts when they built the road with blood, sweat and tears.

“The Season returns in October and we are offering a $10 discount coupon to people who book for any performance as a Father’s Day present,” Mr Retford said.

“A convict Wiseman received his ticket of leave and began building boats and started a business shipping timber, before being granted two hundred acres at Lower Portland Head (Wisemans Ferry).

“Beryl Forbes (nee Wisemans) came with her daughter Libby Rowe. Beryl is in her 90’s and she managed the whole walk.

“Being connected with this play has been an amazing experience and truly a journey of discovery, learning about the trials and tribulations of the men who worked in chains, in the searing hot Australian sun,” said Mr Retford

“It truly has been an honour to be associated with bringing this history to life in-situ.

“The play is a delightful interpretation of how the road was built which takes audiences on a roller coaster of emotions.

“The sad tales of the convicts and the suffering they endured is lightened by that ‘good old Aussie humour’ to take audiences on a journey back in time.

“We have seen audiences members with tears in their eyes as the ‘convicts’ tell their stories of hardship and despair, but soon the mood is lifted as these same convicts rebel against the Government officials and red coat soldiers.

“The script has been carefully researched and follows historical fact closely, but we encourage the actors to improvise in their interaction with each other and audience members so you never really know what might happen,” said Mr Retford.

National Parks and Wildlife Service (NPWS) Area Manager, Angela Lonergan said the partnership between NPWS and the Convict Footprints production company is an excellent way to introduce people to parks.

“The play is performed in situ on the most spectacular section of this historic road and it really is a great opportunity to learn more in a unique and enjoyable way,” Ms Lonergan said.

“We are really proud of this production and the reaction from audiences is always so positive, we just want as many people as possible to have this experience,” she said.

“Proceeds from ticket sales go to undertaking the production and paying the actors, but NPWS wins too because we get to offer a great visitor experience to one of the best locations on the Central Coast,” said Ms Lonergan.

If you are interested in this unique experience, get in quick as tickets are limited to 70 per performance and the play will be conducted over two weekends only:

There is a $10 discount coupon to people who book for any performance as a Father’s Day present using the code: Fathers2016.

Tickets are available at www.ticketbooth.com.au by searching for ‘convict’ and can also be bought over the phone through Central Coast Tourism on (02) 4343 4400.

WilderQuest adventures in nature for kids