A thirty-metre mural has been unveiled on the walls of Polkolbin Distillery, featuring three of the Hunter region’s threatened species– the Regent Honeyeater, Swift Parrot and Pokolbin Mallee. 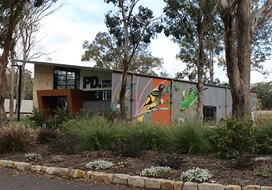 “The Hunter region is one of the most species-rich regions in NSW and is home to an incredible array of rare native animals and plants,” said Mr Grenadier.

“Sadly, the populations of woodland birds such as the Regent Honeyeater and the Swift Parrot, have been in decline over the last 30 years due to habitat loss and increased predation.

“The NSW Government Saving our Species (SoS) program and Hunter Local Land Services (LLS) have been actively working to secure the local population of these woodland birds, now and into the future.

“This incredible mural is the first stage in a new conservation partnership between SoS, Hunter LLS and the Pokolbin and Hunter distilleries which will see the distilleries used for environmental education activities including field days, tree plantings and threatened species research.

“We’re so excited to have the Pokolbin and Hunter Distillery teams on board to help the community learn more about conserving the incredible native birds, plants and other animals that call the Hunter region home,” said Mr Grenadier.

The thirty-metre mural was completed in June 2020.

The unveiling of the mural follows the release of 20 captive-bred Regent Honeyeaters in the Hunter Region in June, which aims to bolster the wild population of the birds and secure their future.

Residents and visitors to the Hunter Valley are encouraged to stop by the mural to learn more about threatened species conservation in the Hunter region. The Department and Hunter LLS are asking visitors to share images from their visit to social media using #SavingOurSpecies.