Birdlife is booming at the Macquarie Marshes northwest of Dubbo as waterbirds flock to the area following recent rains. 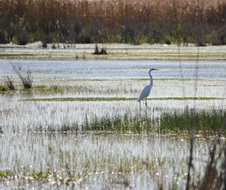 Office of Environment and Heritage (OEH) Senior Wetlands and Rivers Conservation Officer Tim Hosking said the soaking rains over winter had ‘primed’ the system well and with high inflows from the Macquarie River in recent weeks there is now a major bird breeding event in the Marshes.

“The Marshes were inundated by early Spring rainfall across the catchment and a number of waterbird colonies have started up, primarily Straw-necked Ibis which have built an estimated 30,000 nests across a few sites,” Mr Hosking said.

“The skies are also filled with ducks, cormorants, magpie geese, egrets and herons. Recent monitoring indicates there are thousands of nests and newly hatched broods throughout the thriving wetland areas.

“We’ve not seen birdlife at the Marshes quite like this since 2012, so it is fantastic to see the birds return in such good numbers.

“Adding to the cacophony are native frogs such as the Barking Marsh Frog and wetland vegetation is flourishing, creating a sea all shades of green.

“The Marshes response to the water this year is that much better thanks to the Macquarie-Castlereagh Environmental Flows Reference Group’s careful planning and involvement throughout the preceding three-year dry spell,” Mr Hosking said.

Using environmental water allocations carried over from 2012, the advisory group targeted strategic areas within the Marshes that would prime the overall system making it ready to bounce back when more water became available.

“The Advisory Group is a community-government partnership and has a long history helping to shape decisions around environmental water,” Mr Hosking added.

“We often have to make hard choices as the seasons tighten, but informed by rapidly evolving scientific information, together we do the best we can.

“OEH and Commonwealth Environmental Water Office will be looking at the water flows in the Marshes over the next few months in case we need to intervene to extend the duration of inundation at key waterbird breeding and foraging sites.

“By working together we can create the right conditions to improve the health of native plants, fish, waterbirds and other wildlife and restore the river, floodplains and wetlands of the Macquarie catchment,” Mr Papps said.

COVID 19 forces temporary closure of roads and day visitor a...

Wild weather forces the temporary closure of beach driving a...