The most ambitious rewilding project in Australia is achieving incredible results, with 10 locally extinct species now thriving after being reintroduced to three feral-free areas in NSW national parks. 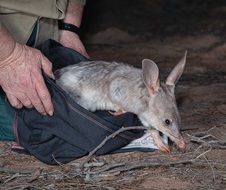 Minister for Environment James Griffin said within three years of animals being reintroduced to their native habitats, New South Wales is already turning back the tide on extinctions.

"We set out a bold plan backed by science to create areas where we could eradicate feral predators and reintroduce locally extinct animals like the bilby and numbat, which have been extinct in the wild in New South Wales for more than 100 years," Mr Griffin said.

"Feral cats and foxes are a huge threat to our native species and are a key driver of high extinction rates, with cats alone responsible for killing 1.5 billion native animals nationally every year.

"This is a world-leading program of rewilding, with a goal of returning the bush to how it was before feral animals were introduced 200 years ago.

"It's incredible to see that in such a short period of time, we're on track to remove at least 10 animals from the NSW extinct list – the first time this will have happened anywhere in the world."

To help threatened species thrive into the future, the NSW Government is establishing 7 feral-free rewilding sites in New South Wales.

Once they're complete, 65,000 hectares of national parks will be free from feral predators, providing a significant conservation benefit for more than 50 species.

Regular monitoring has found that across the three feral predator-free sites, all species reintroduced into their native habitat are thriving and breeding successfully.

AWC Chief Executive Officer Tim Allard said the feral free areas in New South Wales are helping reverse the trend of biodiversity decline and extinctions of our most vulnerable species.

"Effective partnership between Government and conservation organisations is helping deliver the resources and expertise required to provide conservation at scale and this is critical to restoring our country's unique biodiversity," Mr Allard said.

UNSW Wild Deserts lead Professor Richard Kingsford said it is great to see the whole ecosystem recovering and showing that removal of feral pests can make a real difference.

"This is where we are really starting to see the results of not only the season but the benefits of good management and our collaborations, delivering conservation at scale," Professor Kingsford said.

"It really does make a difference to actively manage these landscapes and remove feral animals."

To read more about the NSW Government's seven rewilding sites, visit: Funding plans to turn back the tide of extinction.