Several threatened species rely as much on what is happening in their airspace as on the ground, particularly in the vital process of pollination.

The Saving our Species (SoS) team took the opportunity during national Pollinators’ Week (November 2017) to highlight how SoS is helping threatened species in New South Wales to continue flying their life-saving missions for our native plants.

SoS Manager Linda Bell said that Pollinators’ Week is a reminder of just how vital this process is for the successful reproductive cycle of our plants.

'Our highly mobile pollinators, birds and bats, can fly several hundred kilometres and disperse their precious cargo over large areas.'

Meet one of the crew!

The Critically Endangered Regent Honeyeater is a flagship threatened woodland bird with an estimated population as low as 350 in New South Wales – and SoS is helping to protect this rare bird. 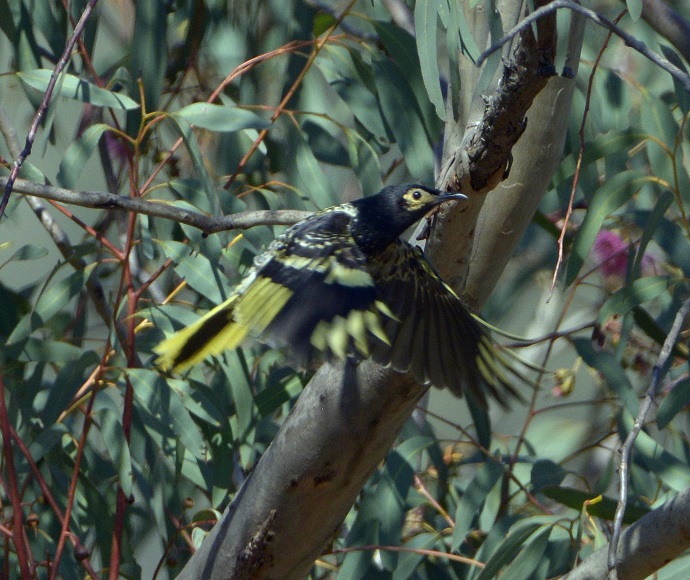 'This top pollinator can track these resources over distances of several hundred kilometres!' said Dr Bell.

Dr Bell, who is based at Dubbo, monitors projects being delivered in four targeted areas: Capertee Valley near the Blue Mountains; the Lower Hunter Valley; Bundara–Barraba; and Mudgee/Wollar. The project complements the SoS Partnership Grant funded by the NSW Environmental Trust Project and delivered by Birdlife Australia.

'These are sites where the birds regularly turn up each year in response to regional patterns in the flowering of key tree species,' said Dr Bell.

Saving our Species is providing $90,000 funding to the Regent Honeyeater project in 2017-18, with a further $900,000 invested over six years by the Environmental Trust for research and actions by Birdlife Australia.

OEH’s Vera Wong and the SoS team organised guided Regent Honeyeater Discovery Tours led by local bird expert Carol Probets in Capertee National Park in November and December. The trial tours were part of a longer term plan to allow visitors to see this rare bird during breeding season without disturbing its nesting. There was a surge of interest in the tours and despite the remote location, several groups of keen birders signed up and were lucky enough to have multiple sightings of the birds with two groups seeing chicks fed in the nest.

Guide Carol Probets emphasised the need to avoid disturbance of nesting birds and the groups watched through a viewing ‘scope’ set up at an appropriate distance.

'Using the scope also made it easier for all participants to see the nest well,' Ms Probets said.

'The tours proved an excellent way to educate and inform interested members of the public about the plight of these birds and allow people an opportunity to see them in the wild.

'Further along the river, a juvenile recently fledged from another nest was observed and adults and juveniles were seen feeding in flowering Mugga Ironbarks and eucalypts close to the Capertee homestead.

'Many participants had their first ever sighting of a Regent Honeyeater and no-one went away disappointed.'

The groups also had the chance to watch other bird species including spectacular views of Rainbow Bee-eaters and Scarlet Honeyeaters.

Watch a mini video on pollinators.

Ed: The public voted in the Magpie as the Bird of the Year in Bird Life Australia’s November 2017 competition. Let’s get behind the regent honeyeater or another SoS bird for the 2018 vote!

Find out more about pollinators and habitat