To count waterbirds, you need to fly like one

For the past 38 years, scientists from the Centre for Ecosystem Science at the University of New South Wales and the Department of Planning, Industry and Environment have taken to the air 45 metres above wetlands and rivers across eastern Australia to observe the annual booms and busts of more than 50 waterbird species over 2.7 million square kilometres. 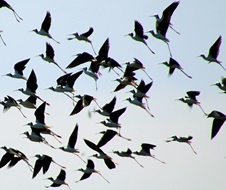 It is not just one of the most ambitious and largest-scale wildlife surveys on Earth but also one of the longest running. To have even conducted the monitoring for a single year was an extraordinary feat – approaching 4 decades is almost a miracle. Over the years and hundreds of hours flying, the team has battled heat, airsickness, dust, thunderstorms, ice, smoke and now COVID to get the job done.

Scientists of a feather, work together

The University of NSW oversees the East Australian Waterbird Survey but with a strong collaboration with the NSW Department of Planning, Industry and Environment, along with 3 other state-based natural resource agencies in Queensland, Victoria and South Australia and the Murray-Darling Basin Authority as major partners.

The program uses a fixed-wing aircraft operated by the NSW National Parks and Wildlife Service (NPWS), with an essential crew of 3 people. The flight manifest is exclusive: the NPWS Pilot with extensive low-level fauna survey experience and 2 expert observers with specialised waterbird flight training who count the waterbirds on up to 2000 individual waterbodies each year, providing a detailed snapshot of aquatic ecosystem health. There are also often additional observers being trained.

The survey flies along 10 and 30-kilometre-wide bands that stretch from the continent's eastern edge, westwards into Central Australia. The team has to fly so low because they need to get the birds into the air to identify and count them accurately.

According to the leader of the program, Professor Richard Kingsford, Director of the Centre for Ecosystem Science at UNSW: "This survey has delivered so much good information, used for identifying hot spots of biodiversity for designation as National Parks, changes over time for key wetland areas, such as Ramsar sites and information relevant for managing rivers and wetlands. Long-term data is critical to understanding the booms and busts and human impacts on ecosystems", he said.

Senior scientist with the Department of Planning, Industry and Environment and coordinator of the project, Dr John Porter, who has flown on the surveys for 33 years, says the project is crucial to managing the wetlands of Eastern Australia.

"This is a really great example of a large scale, long-term monitoring program that's delivered major benefits for managing habitats, environmental water flows and wildlife," Porter says. Decades of monitoring has shown waterbirds to be excellent indicators of the health of wetlands and waterways - changes in their abundance and distribution track environmental changes well.

Caught in the grip of worsening climate change, the scientists have observed a steady decline across all the key indicators of wetland health – including falling bird populations, fewer big breeding events, less water in wetlands and river floodplains and the number of species successfully breeding.

However, the survey plays a crucial role in driving policy decisions, says Porter. Previous data collected by the team led to the addition of important waterbird habitat to the national park estate. The data also helps to inform the management of water for the environment which can be used to sustain critical breeding events.

After this environmental water is released, Porter says the team can sometimes see a strong positive impact on breeding events, particularly when combined with large natural flows.

"The environmental flows make such a big difference," he says. "After the releases we see these green jewels in the landscape, and that is because of environmental water flows, and then we see that the breeding cycles are completed. The Macquarie Marshes and Gwydir Ramsar sites are great examples of this."

Since surveys began in 1983, improved technology has made the surveys easier to conduct , but methods have remained the same. In the beginning, navigation was dependent on topographic maps, whereas now GPS allows scientists to much more accurately and easily record their position.

The onboard observers still record their count data by voice, but instead of speaking into cassette recorders they now use digital recorders. But, Porter says, though he thinks in 40 years it is unlikely observers will conduct the survey in a Cessna, there is currently no other feasible way to get an accurate snapshot of the status of the nation's wetlands and waterbird populations.

"It is currently impractical for a computer or drone to replace an expert onboard observer who can instantly recognise 50 to 60 waterbird species from different angles, in different lighting conditions and in different stages of breeding plumage. Long-term monitoring by skilled observers is the only way we know what's happening with Australia's waterbirds. It's the most cost-effective way of doing a stocktake of the health of our wetlands.