Visitors to the picturesque Mullion Falls on the outskirts of Orange will have a much easier walk from now on. 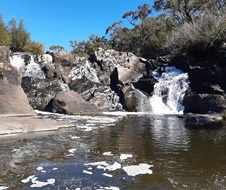 Upgrading part of the Central Mines Trail to the falls in the Mullion Range State Conservation Area has been completed ahead of the July school holidays.

She said: “We’ve upgraded the track surface of the steep final section to make it safer for our visitors, using local stone to re-shape and profile the steps on the trail so they blend into the surrounding landscape.

“Besides making the track safer, the works have also improved the view over the falls.

“The $15,000 upgrades are part of the biggest visitor infrastructure investment in the history of NSW national parks, with the NSW Government investing $257 million to roll out 170 projects across the national parks estate”.

The works also include improved trail signage as well as removing weeds like willow and blackberry.”

There are now great views of the falls which can be seen from the top of the trail, from the mid-trail rock platform and the final rock platform 50m above Summer Hill Creek.

Ms Buchanan said: “NPWS has a real commitment to support the local community and contribute to the economic growth and employment in the region.

“The works are being managed by NPWS staff, and completed with the help of local not-for-profit organisation, Skillset, which provides a site supervisor and a three-strong, fully-equipped work crew. “

The falls are particularly striking when water levels are high following heavy rainfall. At the bottom of the waterfall, there’s a popular swimming hole.

The area has a gold mining boom-era history, with the old water race that once fed water through to mining areas still visible.

Visitors are remined to always wear appropriate footwear and remove all rubbish. Pets are not allowed in the area.