Tracking turtles on the Tweed Coast

Saving our Species has teamed up with Australian Seabird Rescue to develop NSW TurtleWatch, a citizen science program with community volunteers at its core. 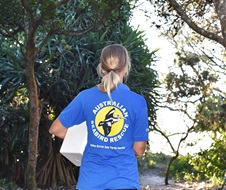 Jen Slape has been a volunteer with ASR for the last 8 years and the NSW TurtleWatch program for 3 years. Her interest in marine turtles spans decades and has seen her travel the world to take part in volunteer turtle conservation projects. 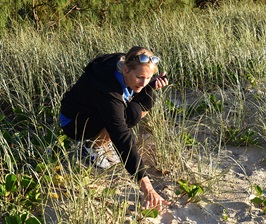 As a volunteer with NSW TurtleWatch, Jen monitors beaches for nesting activities, participates in marine turtle public awareness, education and advocacy projects and helps to coordinate volunteers for the ASR rescue truck and hospital on the Tweed Coast, where Jen lives.

Jen conducts the monitoring of the Tweed Coast nests at sunrise – the best time of day to see turtle tracks before activity on the beach increases – to look for signs of disturbance from predators and for indicators the eggs have begun to hatch.

Jen says that the odds are against marine turtles, with data showing that only about one in 1000 marine turtles worldwide reaches reproductive age.

This is why, says Jen, becoming a volunteer with NSW TurtleWatch is so important, as volunteers play an important role in helping to watch the nests of these unique turtles.

To find out more about threatened species, visit Saving our Species.

Volunteers are trained in key locations across northern NSW to systematically monitor and record information in priority nesting areas.

To get involved, email: