The dozen endangered Pied Oystercatcher (Haematopus longirostris), that call the Byron area home need help - with beachgoers urged to tread carefully from now until the end of summer. 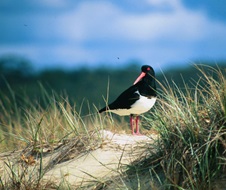 NSW National Parks and Wildlife Service (NPWS) Ranger, Jen Atkins, said chicks and eggs of this beautiful bird are at risk of being accidently crushed by people and their dogs.

“The eggs and chicks of most shorebirds are almost perfectly camouflaged, so it’s essential that anyone walking at this time of year avoids bird nesting areas,” Ms Atkins said.

“Also, hatchlings need the parents to keep them shaded and can perish in the hot sun if the adults are threatened and forced to leave the nest for too long,” she said.

“Birds exhibiting behaviours like shrill calling, swooping and other diversional behaviours, indicate it is most likely that people or their dog are too close to the chicks or nests.

“There are only six breeding pairs of Pied Oystercatchers known in the Byron area at Belongil Beach, Tallow Beach and Brunswick Heads Nature Reserve.

“The total number of breeding pairs along the entire NSW coastline is less than 200 and each female lays just one to three eggs per season. So every chick is an important part of keeping the gene pool healthy and this species secure well into the future.

“Byron‘s beaches are also home to other threatened shorebirds such as the critically endangered Beach Stone-curlew and the endangered Little Tern, as well as several migratory species from the northern hemisphere.

“Shorebirds are also vulnerable to entanglement in abandoned fishing line. People can help by collecting and appropriately disposing of discarded fishing gear.

“Other simple ways to help with shorebird conservation include keeping well away from fenced areas and keeping dogs within designated exercise areas at all times,” Ms Olley said.

Information on the designated dog exercise beaches at Brunswick Heads, Belongil and Tallow/Suffolk beaches can be found at: Off-leash exercise areas.

For more information on threatened shorebirds, visit: Office of Environment and Heritage