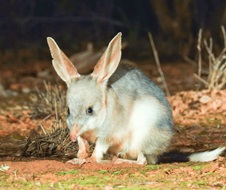 “As the first generation of bilby babies conceived and born on site at these parks in more than a century, they represent a major milestone in this scheme,” Mr Kean said.

“I am pleased to report that despite the drought, the bilby colonies have successfully established and are beginning to grow. And better still, one of the checked females was actually carrying triplets!”

The two feral predator-free areas at Pilliga and Mallee Cliffs are eventually expected to be home to an estimated 1950 bilbies, representing over 15% of the population.

Feral cats, which have been a key driver of mammal extinctions, kill an estimated 457 million native mammals, 596 million reptiles and 312 million birds every year in Australia, highlighting the critical importance of establishing large feral cat-free areas.

“Without the threat of feral predators, we expect that all of the locally-extinct species that AWC and NPWS are returning to Mallee Cliffs and the Pilliga will be able to establish footholds in NSW once again,” Mr Allard said.

“Within a couple of years of these mammals being reintroduced, you will be able to see marked changes in the landscape. The ground will be covered in small burrows and there will be an abundance of native flora. It will be like stepping back 200 years.”