Many locals in the Port Stephens area on the NSW north coast may be unaware that the threatened species, Prostanthera densa, a small mint-smelling shrub with delicate, pale purple flowers is found right on their doorstep. 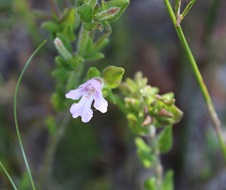 It’s one of only four locations where the vulnerable villous mintbush is found in NSW, and if not for the work of Saving our Species (SoS) and dedicated volunteers, this plant may have become locally extinct.

Several years ago, the only place Prostanthera densa was found in the Port Stephens area was in pockets of bushland at Nelson Bay, alongside rapidly expanding urban development.

Saving our Species stepped in to save the Port Stephens area villous mintbush population from local extinction, with a program of translocation - the intentional, human-mediated movement of organisms from one place to another.

Cuttings were taken from wild plants and propagated in the Hunter Region Botanic Gardens with help from volunteers, who helped grow them to a size suitable for translocation.

The plants were replanted in Tomaree National Park on Tomaree Head at Port Stephens.

When choosing where the plants would be located within Tomaree National Park, Saving our Species carefully looked at where the species grows naturally and tried to replicate the conditions including soil type, aspect, altitude and rainfall.

Over 150 plants have been translocated to Tomaree National Park with a success rate of greater than 70 percent.

Volunteers from another group, Friends of Tomaree, are maintaining the translocated plants and surrounding habitat, playing a key role in the high success rate.

The translocations have alleviated the risk of local extinction and increased the genetic diversity of the local population.

The green thumbs at the Hunter Region Botanic Gardens have been aware of Prostanthera densa and its local rarity for nearly 30 years.

It was collected by one of the volunteers in 1993 and some plants have been growing in the gardens since then.

However, the volunteers who have helped nurture the villous mint-bush plants up to a size suitable for translocation are excited to have now played a part in returning the species to the wild.

‘Botanic gardens provide an insurance population of rare species, but it's even more important that these species should be able to be reintroduced into the wild’, says Hunter Region Botanic Gardens Chairman, Ken Page.

He says the volunteers are very pleased with the translocation’s success.

‘It’s always a chancy business; these are plants that have become rare, that don't have necessarily a wide ecological range and it's great to see that we can find circumstances where they can grow successfully.

‘Every plant is part of our greater ecosystem. Every plant is irreplaceable and if we don't study and protect these plants, we've got no opportunity and to learn about the unique things they can do for us.’

SoS is also working on securing Prostanthera densa, in the wild at three other sites in NSW – Royal National Park, Bass and Flinders Point and Abraham’s Bosom Reserve at Currarong.

Before SoS, 30 villous mintbush plants were known to exist in the wild in NSW, but thanks to targeted surveying plus translocation efforts, that number is now over 3,100.