In eggciting news, the first hatchlings have emerged from one of eight turtle nests being monitored along the NSW coast by volunteers from the NSW TurtleWatch program. 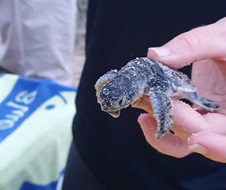 The nest was laid at Port Macquarie in December and the hatchlings found during a nest inventory last week.

“People should keep their eyes out from now until May for turtle hatchlings on north coast beaches.

“Our volunteers are like expectant parents at this time of year, eagerly awaiting signs our efforts have paid off.

“When we see those indications of hatchlings emerging from the nest, it’s an exhilarating feeling to think another lot of hatchlings have made it to the ocean.

“We did have some fears for the Port Macquarie nest after evidence of fox disturbance, but National Parks and Wildlife Service (NPWS) rangers undertook some preventative measures including installing predator mesh to deter digging.

“After a nest has hatched NPWS conduct a nest inventory that will give us vital information about the success of the nest. This information can be used to help future monitoring and conservation efforts. The Port Macquarie inventory revealed over 90% of hatchlings from more than 100 eggs made their way to the ocean.

“15 live hatchlings were uncovered during the excavation and released after sunset.

“This has been a great start for the NSW coast turtle hatching season and our volunteers stand watch over another 7 nests in the Tweed, Clarence Valley, Coffs Harbour and Port Macquarie areas.

“While we try to intervene as little as possible, we have worked with NPWS and council staff to give two nests a helping hand this year.

“One green turtle laid eggs on Manly Beach and we have relocated all 144 eggs from this nest to the Coffs Coast as they would not have survived in Manly due to the cool temperatures experienced there.

“Another nest laid on the Tweed Coast over the Australia Day weekend had to be relocated as it was laid below the high tide line.

“Fingers crossed we get some successful hatchlings from these and all of our other nests,” Ms West said.

To help hatchlings please remember to keep our beaches free from marine debris, sea turtles dig in the dark so keep lights low and keep your eyes peeled for hatchlings while walking the beach. If you see a hatchling on the beach, please contact Australian Seabird Rescue immediately on 02 6686 2852 or environment line 1300 361 967

The NSW TurtleWatch program  is an initiative of the Department of Planning, Industry and Environment’s Saving our Species Program with Australian Seabird Rescue. It is a citizen science program involving volunteers collecting valuable data for marine turtles nesting in NSW and their potential threats.