Environment Minister Mark Speakman has urged Sydneysiders to help protect an endangered colony of Long-nosed Bandicoots in the inner west, as part of joint project undertaken by the University of Sydney, the Office of Environment and Heritage and Transport for NSW. 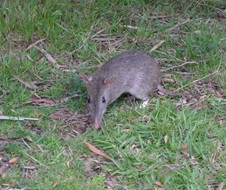 Mr Speakman has announced a six month survey and study to collect information about the colony of bandicoots and raise the community’s awareness of the existence of this endangered population.

“We’re seeking the help of the communities in the Local Government Areas of Marrickville, Ashfield and Leichhardt to look out for signs that bandicoots are nearby and share the information with us,” Mr Speakman said.

“We’re asking residents to fill in our online survey and to visit the Facebook page to update us with sightings or signs of bandicoots.”

In the Inner West, a small colony of Long-nosed Bandicoots has been discovered around the suburbs of Dulwich Hill, Lewisham and Petersham. The animals are often found in grassy areas during the night, and rest in dense vegetation or accessible spaces under buildings and houses during the day.

Bandicoots are nocturnal and often search for food at night. Residents are being reminded to keep family pets such as cats and dogs indoors from dusk until dawn.

This Inner West Long-nosed Bandicoot population has been declared as an endangered species under the NSW Threatened Species Conservation Act 1995.

As part of the Revegetation and Biodiversity Compensation and Monitoring Package for the Inner West Light Rail Extension, Transport for NSW is funding a research project on the Inner West Long-nosed Bandicoot.

OEH will undertake surveys to determine the extent of the population, use radio tracking to determine habitat use and implement a community awareness program to increase knowledge of the species.

Flooding in the Hunter Valley and the construction of the Hu...