The NSW National Parks and Wildlife Service (NPWS) is appealing for information on the destruction of a shorebird nesting site at Congo Beach, just south of Moruya. 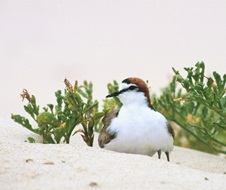 "Making the situation worse is that during the theft the protective fencing was vandalised and a Red-capped Plover nest containing two precious eggs was destroyed," Ms Harris said.

"These are tiny shorebirds with adults less than 10cm in height, eggs no bigger than a 10-cent piece and their chicks when hatched are highly camouflaged standing at just 4cm tall.

"The signs and fencing are painstaking erected each season by volunteers who are dedicated to keeping endangered shorebirds safe.

"Anyone with information on the theft or destruction of the nests is advised to contact the NPWS Narooma office on 4476 0800 or the local Police," Ms Harris said.

Destruction and disturbance of shorebird nest sites is an offence under the NSW Parks and Wildlife Act and the Threatened Species Conservation Act.

NPWS have since returned to Congo Beach to re-install signs and to check on the 5 remaining pairs of shorebirds.

"There are also endangered Pied Oyster Catchers currently nesting at Congo Beach but so far this season one nest has been lost to predation and another nest abandoned due to roaming domestic dogs," Ms Harris said.

"Another shorebird nest has been destroyed at Tuross Lake due to human disturbance.

"The Eurobodalla Coast offers key nesting sites for many of these endangered shorebirds.

"Most beachgoers find it easy to avoid the well-signposted nesting areas and actually enjoy seeing the birds around.

"We have an opportunity to make a difference here and we urge people to please take care and share the shoreline," Ms Harris said.

For more information visit Threatened species or to offer information to help NPWS with its investigation, please contact the Narooma Office.