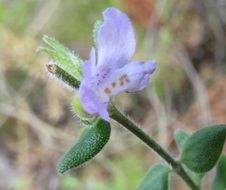 Plans are now afoot to work further on the plant’s propagation and care through close to $10,000 Saving our Species funding and the Sutherland Shire’s Bushcare program.

“It is fitting that we are here today in an area where the famous botanists Banks and Solander would have collected specimens and noted the amazing biodiversity of the region,” Dr Wilson said.

Dr Wilson pointed out the likely medicinal and culinary properties of the Villous mint-bush as well as its high biodiversity value.

“Despite its vulnerability, if undisturbed, the Villous mint-bush is usually found in inhospitable places,” he said. 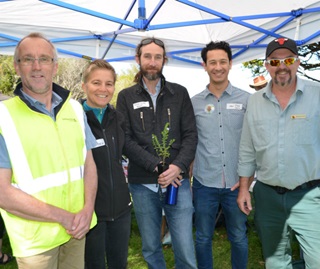 “For instance, this particular mint-bush thrives around rock outcrops and open areas. The ‘hairs’, which give it a fuzzy texture on its stem and leaves, possibly prevent water loss and overexposure to the sun,” he said.

“Current research is also examining the pollination of native Australian plants, using Australian mint-bush species to examine the big picture about plant reproduction in Australia, and key differences between plants with insect and bird pollinators”.

Liza Schaeper from OEH said the funding will go towards helping protect the plant’s habitat from weed invasion, illegal dumping and recreational activities.

“The Saving Our Species program aims to secure as many of NSW’s threatened species as possible in the wild for the next 100 years. It’s really encouraging to see the commitment of so many locals, ready to combine their efforts to help save this threatened plant,” Ms Schaeper said.

Representatives of the East Hills chapter of the Australian Plant Society also joined the enthusiastic bush care volunteers last Thursday, part of Threatened Species Day, and led a guided walk for the group to learn more about the botany of the area.

To find out how you can get involved email Kevin Seymour, Sutherland Shire Bush Care Team Leader.