Visit NSW national parks for a whale of a time 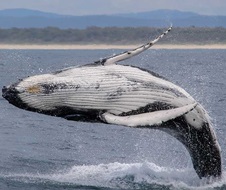 Environment Minister Matt Kean said NSW has more than 860 national parks and reserves, many of which are great coastal vantage spots for whale watching.

“During May to November, more than 30,000 Humpback whales migrate from the cold waters of Antarctica to the warmer waters off north east Australia to mate and give birth before heading south again,” Mr Kean said.

“Almost 50 per cent of the NSW coastline is national parks, with vantage points located at lookouts, headlands and foreshores. These are great spots to see these amazing creatures, some of which weigh 40 tonnes and are as big as a city bus.

“Coastal national park visitors may be lucky enough to see more than one species of whale, with southern right and minke whales often spotted during the season.”

Keen whale-watchers can download the free National Parks and Wildlife Service ‘Wild About Whales’ mobile app, which helps users find the best locations for spotting whales, get real-time notifications of nearby sightings, and record their own sightings.

“The free Wild About Whales app is a great tool for the whole family to learn more about whales, while also contributing to a citizen science project,” Mr Kean said.

“Citizen science volunteers and other organisations such as ORRCA do an amazing job of monitoring the number of whales migrating along the NSW coast each season.”