The entire colony of brush-tailed rock-wallabies in Kangaroo Valley survived the 2019-20 bushfires which devastated the region, with the support of emergency food drops, announced Environment Minister Matt Kean today. 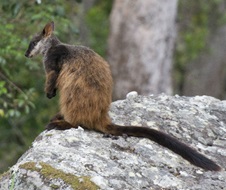 The life-saving food included carrots and sweet potatoes, as part of the Saving our Species (SoS) program to help this significant colony of a native species.

“After the ferocious fires, it was a welcome relief to hear monitoring cameras and the GPS collars confirmed all the wallabies survived the blaze after trapping several wallabies to assess their health and remove GPS tracking collars,” Mr Kean said.

“It was great to hear the wallabies were in good health, with one wallaby identified as a joey that was not previously known.

“This level of intervention is vital to help maintain these colonies and allow them to recover. At this stage feeding is expected to continue until natural food resources and water become available in the landscape during post fire recovery,” Mr Kean said.

“I am thrilled to hear rock-wallabies are in good health thanks to the emergency food drops and incredible work by NPWS rangers across our region.”

Thousands of kilograms of carrots and sweet potatoes were delivered to wallabies in the Capertee and Wolgan region, Yengo National Park, Kangaroo Valley, Jenolan and Oxley Wild Rivers National Park, in the immediate aftermath of the bushfires helping to ensure the survival of the endangered iconic species.

The NSW Government’s Saving our Species program aims to secure the future of threatened plants and animals, such as the brush-tailed rock-wallaby in the wild.

Local groups from Bomaderry team up to save an endangered sp...