Recent rain in outback NSW is bringing good news for the state's only population of Wangarru (yellow-footed rock-wallabies) after years of drought impacts. 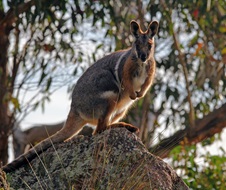 Department of Planning, Industry and Environment Saving our Species Project Officer Dr Sarah Bell said the most recent survey has finally shown an increase in numbers.

"In NSW the Wangarru is known from a single population on and adjacent to Mutawintji National Park and Mutawintji Nature Reserve.

"The wallabies have been surveyed every year since 1980 in one of the longest running aerial survey studies in NSW.

"We know the drought conditions of the last few years hit them hard.

"The good news is this year's count has seen an increase to 75.

"This is a promising sign for the species and means considerable effort in fox and goat control, funded through the Saving our Species program, is helping to give the wallabies their best chance at bouncing back, now that conditions have improved.

"The Wangarru is not just ecologically important as the most easterly population of the species, but is also culturally significant to the local Aboriginal community.

"Its significance was a key consideration by the Mutawintji Board of Management when they purchased Nuntherungie station which was added to the national parks estate in 2019.

"Numbers are still low, but with the far west receiving more rain in the last few weeks, improving their habitat, we are hopeful next year's surveys will see a further increase in numbers," Dr Bell said.