Watch out, turtles about!

If you fancy a spot of turtle spotting, now is the time to help monitor turtle activity on beaches on the NSW north coast. 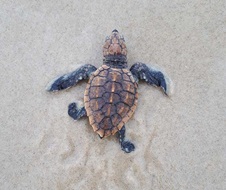 Five of the world’s seven species of marine turtles call the waters of NSW home. We are lucky to see loggerhead, green, leatherback, hawksbill and olive ridley turtles in our oceans and to have loggerhead and green turtles nest on some of our beaches.

Last year, ten turtle nests were found between Tweed and Coffs Harbour, a higher number than in previous years.

According to NPWS Ranger Keely Markovina, marine turtles are a threatened species and it is important to protect them at this time of year when they are very vulnerable and should not be disturbed.

“Female turtles come out of the water between dusk and dawn to lay their eggs. The next morning, you can see the tracks they left as they crawled up the beach to search for a good spot to create a nest,” Miss Markovina said.

“The turtle digs a large body pit with her front flippers and then switches to using her back flippers, which act like hands, to scoop out sand to create a deep egg chamber. She lays an average of around 100 eggs into the chamber, which resemble ping pong balls, before covering them with sand and returning to the ocea

“After 8 -15 weeks of incubation, the hatchlings will climb their way out of the nest over a few days and then make a quick dash to the water to avoid predators. Only about one in 1000 will survive to adulthood under natural conditions, and even less in places that have extra pressures caused by humans,” she said.

“We believe NSW beaches will become increasingly important for turtle nesting if sand, sea and air temperatures continue to rise, as our climate is cooler than in QLD where there is a higher amount of turtle activity than here.

The temperature of the sand inside the turtle’s nest has an impact on the incubation time and the gender of hatchlings – hotter temperatures produce more females,” Miss Markovina said.

“The more we understand about how, where and when marine turtles nest, the more we will be able to protect them.

The National Parks and Wildlife Service is urging people to report sightings of turtle tracks, hatchlings and dead or injured turtles to the local NPWS office as soon as they see anything.

“Don’t disturb a nesting turtle, be careful where you walk and remember that dogs are not permitted on beaches in national parks,” Miss Markovina said.

“It’s also important to dispose of litter, plastic and fishing line properly as turtles can become entangled or eat plastic rubbish washed into the sea.”

Australian Seabird Rescue also works with NPWS to protect turtles through an annual citizen science project on marine turtle nest monitoring. To become involved contact admin@seabirdrescue.org.au. Further information on marine turtles can be found at: Office of Environment and Heritage.