Rare waterbirds have found safe haven in drought refuge wetlands across the state. 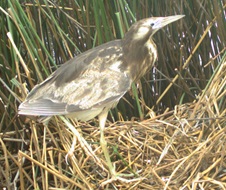 Threatened Australasian bitterns and their smaller cousins, Little bitterns, have been busy booming, orrking, nesting and hatching in patches of wetland in the Murrumbidgee, Macquarie, Gwydir and Murray river regions.

During the current drought, the Office of Environment and Heritage is using its limited water resources to provide vital refuge for native fish, birds and other wildlife.

In the Lower Murrumbidgee, surveys at 9 locations have located a number of refuges for both species.

‘By maintaining these natural wetlands during dry times, we are able to provide a lifeline for wildlife that have limited options,’ Mr Maguire said.

‘Here, the bitterns can feed, breed and raise their young, allowing the species to survive beyond the present conditions.

‘The Australasian bittern is a mysterious bird with an unusual booming call.

‘It’s believed this deep, resonating call gave rise to the story of the bunyip,’ he said.

Native wetland plants including reeds, rushes and water ribbons are providing the perfect habitat for the birds to shelter, feed and breed.

Both the Australasian and little bittern are cryptic birds, often remaining hidden amongst the reeds. One of the most effective ways to survey the birds is during breeding season when the males regularly call to attract the attention of females. The sound of each species makes is unique and easily distinguishable. The Australasian bittern call is a very deep boom while the Australian little bittern makes a higher pitched orrk.

Australasian bitterns have also been found in the core wetlands of the Gwydir region, the Macquarie Marshes and in significant numbers at Moira Lake in the Murray catchment all of which are providing essential habitat for the birds.

Regular surveys of the sites will allow water managers to make decisions on the future management of the wetlands in response to seasonal conditions.