A rare and mysterious waterbird is making itself known in the Gwydir catchment. 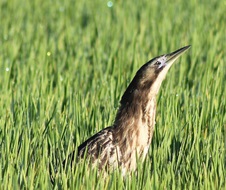 For the previous decade there had been no records of the endangered Australasian bittern in the Gwydir Wetlands. But in the last two years this illusive waterbird has been heard calling on three occasions, with brief glimpses from the Bunnor Bird Hide at Water Bird Lagoon.

Water for the environment has been strategically delivered to the Gwydir Wetlands to restore the health of the system for more than ten years. The return of regular flows has seen vast improvements to the condition of this water dependent system. Wetland plants have returned that provide ideal habitat for wildlife including bitterns.

Senior Water Manager Daryl Albertson said that providing water over subsequent years had restored many wetlands in the Gwydir which now provide suitable habitat for plants and animals, particularly in dry times.

‘Strategic watering over many years has resulted in great improvements within the Gwydir wetlands, securing them for the future,’ Mr Albertson said.

‘We have seen the return of many waterbirds often in high numbers, however it was a surprise for NSW Office of Environment and Heritage staff to hear the call of the Australasian bittern, something they had not encountered in the area before.

‘The Australasian bittern is a solitary bird that is rarely seen and is mainly active at night.

‘The males call in a series of deep growls or booms that travel across the wetlands in search of a mate.

‘By maintaining these natural wetlands during the current dry conditions, we are able to provide a critical refuge for bitterns and other wildlife,’ he said.

These distinctive waterbirds have found safe haven in several drought refuge wetlands across the state.

The Australasian bitterns and their smaller cousins, little bitterns, have also been busy booming, orrking, nesting and hatching in patches of wetland in the Murrumbidgee, Macquarie and Murray river regions.

During the current dry conditions, the NSW Office of Environment and Heritage is using its limited water resources to provide vital refuge for native birds, fish, frogs and other wildlife.

Both the Australasian and little bittern often remain hidden amongst the reeds. One of the most effective ways to survey the birds is during breeding season when the males regularly call to attract the attention of females. The sound of each species makes is unique and easily distinguishable. The Australasian bittern call is a very deep boom while the Australian little bittern makes a higher pitched orrk.

Regular surveys of the sites will allow water managers to make decisions on the future management of the wetlands in response to seasonal conditions and continued improvements of these iconic wetlands will support the waterbirds that call them home.

Over $11.6 million to support coastal works across the Illaw...