Water is flowing into the Tuppal Creek using new and upgraded infrastructure funded by the NSW Government. 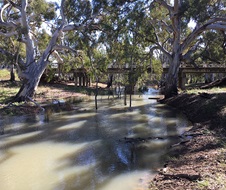 Over the next week, water will flow from the Murray Irrigation channel system into the Tuppal Creek, providing a flush of water through the system and increasing the area and quality of habitat available for native fish and other wildlife.

The project to restore the Tuppal Creek was instigated by landholders who had seen the health of the creek decline over decades. The creek was disconnected from the Murray by a levee built in the 1950s.

In partnership with the Department of Planning Industry and Environment and Murray Irrigation, landholders helped develop a plan to return higher flows to the system and improve the health of the system.

Local contractors from Deniliquin were engaged by Murray Irrigation to upgrade two structures and install a new escape.

Senior Environmental Water Manager Paul Childs said this watering event was an opportunity to test the new and upgraded water delivery structures as well as provide some benefits to the creek’s environment.

‘The Tuppal Creek is a 60 km long ephemeral creek that was once an anabranch connecting the Murray and Edward rivers,’ Mr Childs said.

‘Over the past decade, we have managed the delivery of water for the environment into the creek using Murray Irrigation delivery infrastructure.

‘When the chance to upgrade and enhance that infrastructure came up in 2018, we took the opportunity to invest in the works.

‘We have seen the creek respond positively in the past and expect even better outcomes as a result of the increased flow capacity.

‘This flush of water will allow for carbon transfer within the creek system, providing a boost to the aquatic food web that feeds native fish.

‘As water quality improves and water plants respond to the flow, we expect to see improved habitat conditions for Murray cod and small-bodied native fish species like gudgeons and smelt.

‘As recently as last week, we had reports of native water rat sightings along the creek, a species which hasn’t been observed in the Tuppal Creek by locals for many years.

‘As the health of the creek improves, so will the riparian corridor and fringing river red gums, which will support threatened species such as superb parrots and squirrel gliders.

Improved flows through the creek are expected to improve water quality as it re-enters the Edward River, upstream of Deniliquin.